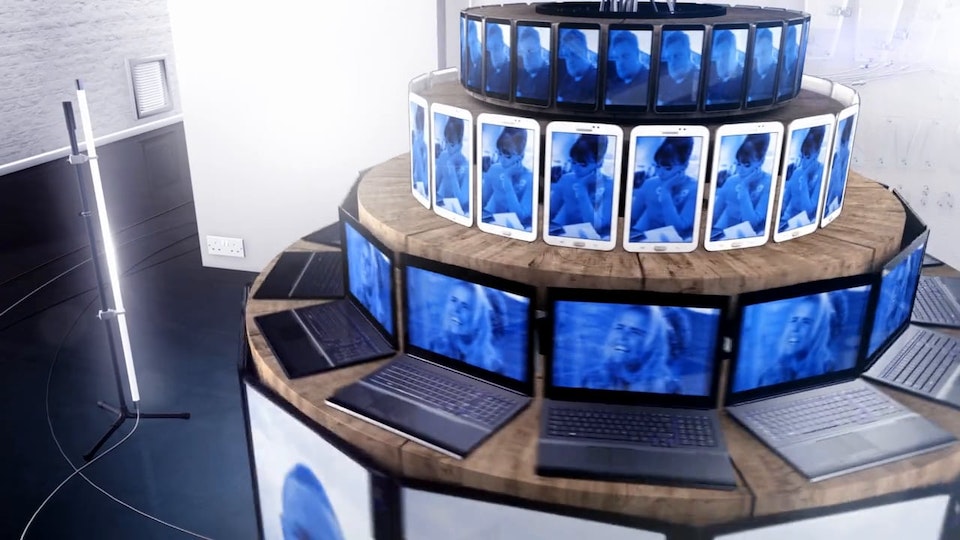 The Ones To Watch

Title sequence for The Ones to Watch, the broadcast show of Samsung's Launching People, a talent initiative featuring Idris Elba, Paloma Faith, Rankin and Gizzi Erskine as mentors. Season One was broadcast on Sky 1 in 2014.

In this dramatic, visually arresting sequence we discover huge icons, cast in concrete, each representing one of the disciplines that feature in the programme, in a real environment. We start on a giant Digital SLR - defying expectation it begins to move across the ground before serenely lifting off. We cut wide to see it impossibly rising up skywards being lifted by helium filled balloons. We cut around different environments catching glimpses of the other icons before seeing them gather in the sky to conclude the sequence.

This concept visually suggests the idea that with hard work, ambition and creativity, anything is possible. And that each of the mentors will take the participants on a positive, uplifting journey.

There is no glossy artifice here, just real textures in real environments. This is a programme with integrity and offers genuine opportunities to the genuinely talented.

In an industrial exhibition space we discover a large-scale installation that consists of device screens arranged in columns. Initially static, anticipation builds as we hear the mysterious object powering up. The screens light up in turn, each column displaying still images of the mentors. As this happens the columns begin to freely rotate independently. The images become a blur until the machine reaches optimum rotation speed, when it reveals a smooth moving image. We cut around the scene picking up various moments of moving image on the screens. We conclude the sequence by pulling wide as the zoetrope continues to spin.

Set in a real environment, this sequence will have real presence and atmosphere, as well as the visual spectacle of the dynamic zoetrope installation. It will deliver a modern, creative, fresh perspective on a traditional medium. Also, the idea of bringing static images to life in this way works as a nice metaphor for setting in motion the participants creative ambitions.

In an industrial project space, submerged icons break the surface of a glossy pool and rise up, clearing the pool level until they pause, suspended in mid air. A beautiful, seductive sequence that contrasts the gritty, real textures of the environment with the glossy, clean substance of the liquid.

This option is designed as a visual reference to the notion that the cream of the talent pool, given the right opportunity and mentoring, will rise to the top.